Rickey Welch was 19 when he enlisted in the Air Force shortly after the September 11, 2001, attacks.

He served five years and says his biggest challenges when he returned to civilian life were post-traumatic stress disorder and the ability to trust people.

“When you leave the military, you expect people to support you,” Welch says.

He worked in high-end retail but says it was “super competitive” and he wanted a role where he felt “part of a family”.

US Vets, a nonprofit that helps veterans transition to civilian life and start new careers, helped him find a job at a hotel in Waikīkī.

Veterans are among the “hidden workers” — a relatively untapped talent pool for businesses nationwide — identified by a 2020 Harvard Business School study. The report says these hidden workers come from many walks of life: they include caregivers casual workers returning to the workforce, immigrants, refugees, people with physical disabilities, and people who have moved from place to place and are now looking to get back to work.

The Harvard study interviewed over 8,000 hidden workers and more than 2,250 executives in the US, UK and Germany. It is said that these people want to work, but have difficulty finding a job because they do not meet the hiring requirements. The study concludes that many of these individuals may perform well in their jobs, but will never have the opportunity.

The gains are widespread, according to executives of companies that hire significant numbers of hidden workers. “Nearly two-thirds of all of these CEOs said that once hired, previously hidden workers performed significantly better or better in six key areas that matter most to employers: attitude and attitude. work ethic, productivity, quality of work, employee engagement, attendance and innovation.”

Hawai’i had about 46,500 job openings as of November 2022, according to Dr. Eugene Tian, ​​chief economist at the state Department of Business, Economic Development and Tourism.

The nonprofit organization Easterseals Hawaii offers services that help people with disabilities or special needs, including its Employment Services program, which connects participants with employers and provides job training.

CEO Andrea Pettiford says the program allows companies “to tap into a pool of potential employees they may not have known and benefit from their engagement.”

It provides training to an average of 90 people per year. When Business in Hawaii spoke with Easterseals Hawaii in August, 15 people were enrolled in the program. Each participant receives tailored training and advice on how to create a CV and apply for a job.

Pettiford says Easterseals Hawaii tries to match participants with companies where their skills and interests are a good match. That way, she says, employees get the support they need to succeed and employers have a more transparent way to close their workforce gaps. 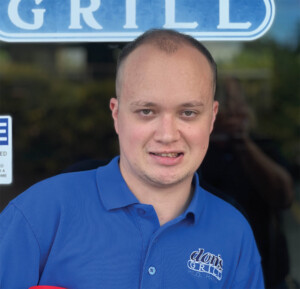 Grantz works as a waiter at the restaurant and says he enjoys the job because he can practice socializing with customers and co-workers. He visits three days a week for four hours at a time and has multiple duties, including driving customers to tables and bringing them food and drink.

“Having this job with Don has been a blessing and very rewarding for him,” says Rochelle Grantz, Dylan’s mother. She says her son learned to work during “busy, stressful hours, and with large groups all arriving at the same time,” which boosted his confidence.

Danielle Hoopii, manager of Don’s Grill, says the restaurant has had workers with special needs in the past, but “always in the back of the house, in the kitchen.” Grantz was the first to work in front of the house.

“He interacts very well with customers and we don’t really give him special treatment,” she says.

Grantz tries to do everything, she says, but due to his physical limitations he is unable to carry heavy objects. But, she adds, “He will try and try.”

Hoopii’s hiring model is, “If you want to work, I don’t care if you have experience or not, I’ll train you.”

His advice to other employers: Be open-minded and patient when working with people with learning curves.

“Everyone needs that first chance to get started,” she says.

Who are the “hidden workers”?

A 2020 Harvard Business School study indicates that there are 27 million hidden workers in the United States. She divides them into three categories:

• Missing hours: Individuals holding one or more part-time jobs but willing and able to work full-time.

• Absent from work: People who have been unemployed for a long time but are looking for a job. These include mothers who have raised children and others who care for them, and people who do not work while sick.

• Absent from the squad: People who are not working and not looking for work but who are willing and able to work depending on the circumstances. 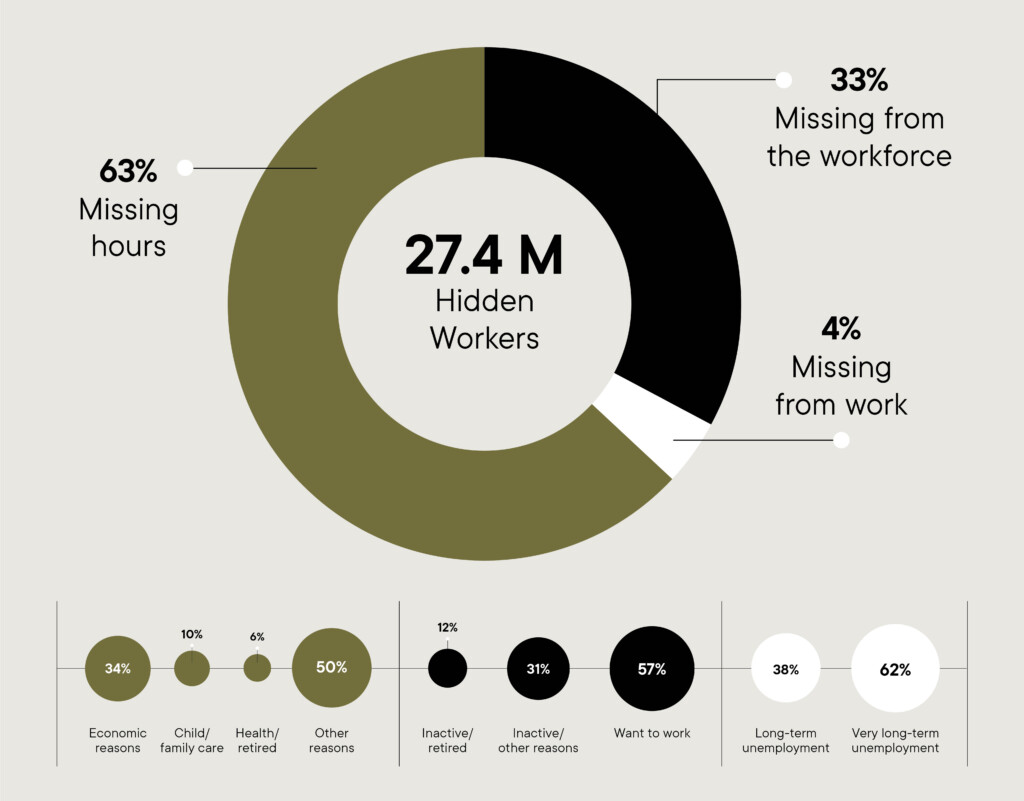 Read the full report at tinyurl.com/HBSHiddenWorkerStudy.

Some employers use applicant tracking and recruitment management systems to organize and track resumes and how people apply for jobs. These tools “are designed to maximize the efficiency of the process,” according to the Harvard study, by filtering candidates based on keywords and selecting candidates who seem best suited for the job.

However, according to the study, this process excludes “viable candidates whose CVs do not meet the criteria but who could perform at a high level with training”. Many companies recognize this flaw: 88% of employers in the Harvard study said that “qualified candidates” were excluded from the hiring process because they did not match the exact criteria in the job description.

Kaleikaulana Castillo, Workforce Development Coordinator at US Vets Hawai’i, says veterans bring a lot of experience to the workforce, but struggle to translate that into resumes. She says veterans had to do a variety of jobs in the military, so they have valuable skills in leadership, teamwork and hard work.

In the military, she says, “they don’t really just have one job, they really do everything.” She says her organization helped 185 veterans in Hawai’i find jobs in the last fiscal year.

Greg Williams, executive director of US Vets Hawai’i and a veteran himself, says the typical military will be a “very loyal employee.”

“If they like your mission and they’re on board with your mission, they’ll do whatever it takes,” he says. “Because the military mindset is, ‘I can complain about it, but I’ll figure out how to make it happen.’ ”

Welch, the Air Force veteran, says persistence and hard work helped him land his current job at a hotel. When Business in Hawaii spoke to him last November, he had been at work for two weeks and trying to find an apartment.

“Just having a routine is something the military definitely instills in you,” he says. 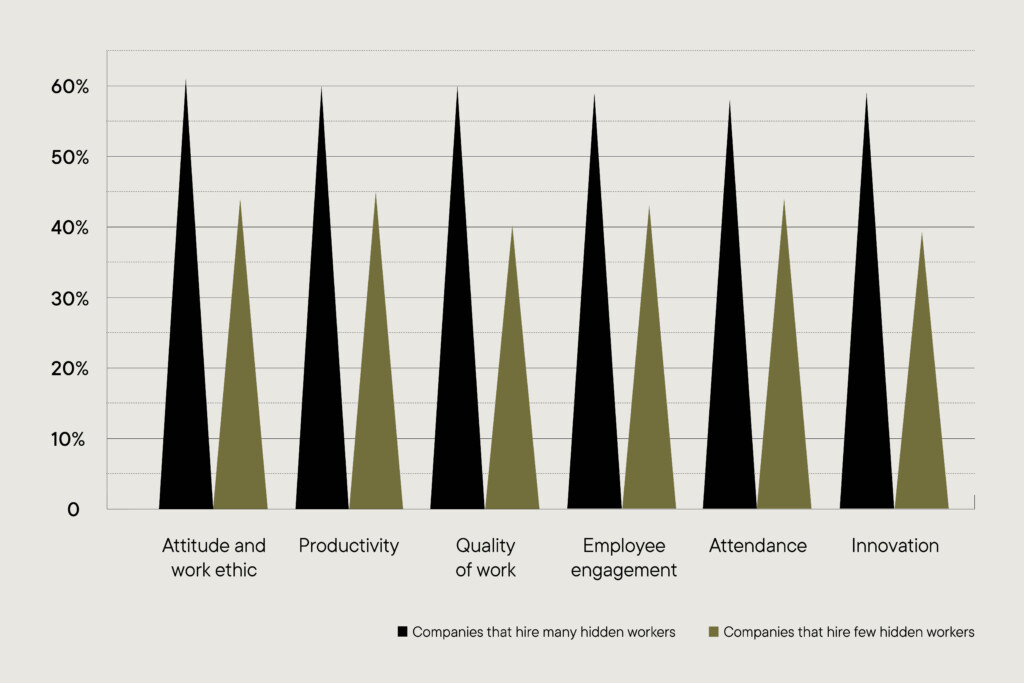 Because they often face discrimination in hiring and promotion, many people do not disclose their disability. A 2017 study by the Center for Talent Innovation estimated that only 39% of employees disclosed their disability to their managers.

About 19% of adults 18 and older in Hawaii have a disability, according to the Centers for Disease Control and Prevention. It says the most common problems are with mobility (involving 8% of all Hawaiian adults), cognition (7%), hearing (5%) and vision (4%), and that some people have more of a disability.

Pettiford of Easterseals says leveraging “the hidden workforce helps us foster and create a more inclusive community where everyone can contribute meaningfully.”

Williams agrees and says veterans “are not looking for help.”

“I feel like we owe it to them to give them the best possible opportunity to find meaningful and rewarding employment, to be a productive citizen,” he says.

The nonprofit organization provides other support for veterans, including helping homeless veterans find housing. Based on US Census Bureau data, the National Housing Assistance Board estimates that 5.5 percent of Hawaii’s 101,975 veterans live in poverty and 485 Hawaii veterans are homeless.

Welch says American vets continue to help her throughout her journey by giving her a “sense of security.” He describes himself as a “naturally confident guy”, but admits he was nervous about applying for a job.

“They offered me words of encouragement, and for me that was huge because I was able to feel more at ease,” he says.

Faced with rising teaching costs during the pandemic, Foothill-De Anza teachers vote to suspend extra work until they get a raise