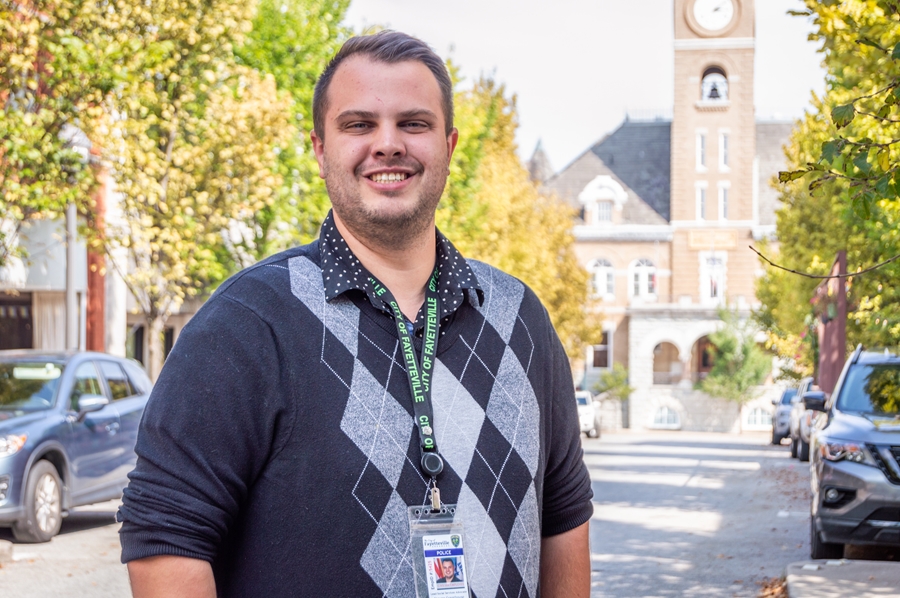 Steven Greathouse, a U of A master’s degree in social work graduate, joined the Fayetteville Police Department’s Crisis Response Team this summer full-time as a senior social services advocate.

The next time you call the Fayetteville Police Department, depending on the type of help you need, you may meet with one of the embedded social workers who are part of the department’s crisis response team. .

That’s because FPD and the University of Alberta School of Social Work recently partnered to create a unique, proactive program to better serve the Fayetteville community and some of its most vulnerable populations.

Working with faculty at the School of Social Work, the FDP secured a $250,000 grant from the U.S. Department of Justice — one of 33 departments to do so nationwide — to embed a social worker to the department’s Crisis Response Team program as a pilot project in the summer of 2021.

This approach has already resulted in more than 400 referrals to the program, giving the community greater access to legal aid and mental health care, and providing resources related to housing, addictions, food insecurity and Moreover.

“We are incredibly proud and honored to be part of such a vital partnership and program that actively helps our campus and the surrounding community,” said Kathryn Sloan, Dean of the Fulbright College of Arts and Sciences at the U of A, which houses the School of Social Work.

“Each time the Crisis Response Team helps someone, they forever change and improve that person’s life – but in many cases, their help has repercussions that also have a positive impact on families, communities, our city and ripples far beyond,” she said.

In a recent case, the crisis intervention team helped a woman struggling with methamphetamine use create a care and recovery plan instead of accusing her of possession. She’s been sober since joining the team, has a plan to prevent relapse, and now knows who to contact if she needs more help.

In another case, the team helped a man struggling with suicidal thoughts and alcohol abuse. With the help of the team, he created a safety plan, voluntarily checked himself into hospital care, received psychotherapy and medication, and after his discharge expressed his gratitude for getting the help he needed. he needed.

“I can confidently say that without the help of the School of Social Work, we would not have received the scholarship, hired a Master of Social Work graduate, or helped over 400 people in crisis get help. they need,” said Lt. Tim Shepard.

Additionally, a similar partnership has now been established between the School of Social Work and the Springdale Police Department – ​​and the school also receives many inquiries about the program from neighboring state police departments.

In Fayetteville, the crisis intervention team pilot project came full circle this summer when Steven Greathouse, a U of A master’s degree in social work, joined the team full-time. as a leading advocate for social services.

“While playing the role of helping people, I really learn something new from every person I interact with,” Greathouse said. “Any comment on how we are doing – whether positive or negative – gives me a better understanding of the city of Fayetteville and why it is so strong.”

Likewise, Rosa said the partnership with FPD has been equally valuable to the school and its students, and she praised FPD’s openness, collaboration, and “strong sense of camaraderie and accomplishment.”

“[The partnership] presents a unique opportunity for students to gain valuable hands-on experience in the community and play a vital role in paving the way for similar partnerships in other communities,” said Rosa. “As social work practitioners and teachers, the value of this partnership lies in the relationships that are forged and in the hopes of supporting the PFD in its efforts to serve the community, and using the data gathered to help further securing funding and other resources for the PFD. »

This hands-on, hands-on work experience was essential for Greathouse, who first started with the FPD as an intern while completing her master’s degree at the School of Social Work.

“Providing the public with social workers who respond to crises gives our community the ability to not only resolve the crises they are going through, but also obtain the services needed to prevent future crises,” Greathouse said. “This is a proactive approach to community policing that prioritizes and helps some of the most vulnerable populations in our community.”

Greathouse said he also took the opportunity to use his expertise and experience in the program to mentor other MSW students and connect them to the Fayetteville community.

“[These students] learning how to apply theory to practice in real time, and seeing their level of enthusiasm for the work we do is one of the most rewarding parts of my job,” said Greathouse.

Over the next five years, Greathouse said the FPD would like to have at least seven crisis response team members providing the community with 24/7 coverage.

“In 10 to 20 years, I hope to continue working in social work in the criminal justice system — especially if it means continuing to build and sustain the program at the Fayetteville Police Department,” Greathouse said.

“Our officers, detectives, dispatchers, records and administration staff are clearly dedicated to the safety and well-being of our community, and it is an honor to serve Fayetteville alongside them as part of the FPD family,” said he added.

As FPD’s Shepard looks to the future of the program, he said he hopes this model of community support will also become a best practice for police departments in the state of Arkansas, where such programs and resources can often “miss inexcusably”.

Shepard said he also looks forward to seeing how the program will shape the work and leadership of the FPD and its officers.

“I hope the program will give our officers a way to get people the help they desperately need and in doing so will prevent officers from becoming numb or jaded because they feel powerless to help the most vulnerable in our community,” he said.

So far, the success of the program and the partnership with the School of Social Work has left a huge impact on Shepard and how he views his work.

“Working with the School of Social Work on this program has been the most rewarding aspect of my career and one of the only bright spots during a turbulent and unprecedented time,” Shepard said.

“The knowledge imprinted on me through conversations with [U of A] challenged me to look at the issues facing law enforcement from different angles, which has had a huge impact on how I approach my leadership role within the department,” he said. added.

As the successes of the crisis intervention team increase, the growth of the program, the partnership with the School of Social Work and the assistance to the FPD will be paramount in order for Fayetteville to remain, as the said Greathouse, the strong and thriving community that it is.

Gardening tips for beginners from an ex-rookie turned pro

Remote work in paradise may be closer than you think