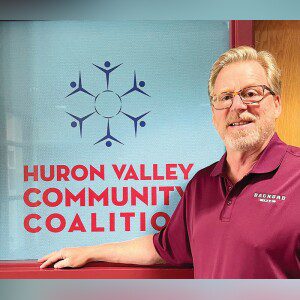 When Randy Root took over the reins of the Huron Valley Community Coalition in 2015, he didn’t hesitate to jump in with both feet.

Back then, running the Coalition was a part-time job with a small office at the Duck Lake Center and a small budget to go along with it.

Root was new to the world of drug prevention, but that didn’t stop him from winning a federal drug-free communities grant that increased funding from $20,000 a year to $145,000 a year. and allowed Root to opt for a full-time and hire program. director Jordyn Najduk in 2016.

Eight years later, with the help of Najduk and a 12-member community council, Root laid the foundation for HVCC, which works to reduce substance use among minors in the Huron Valley. The organization offers educational programs for parents and caregivers like Drugs 101, and resources on how to talk to kids about drugs and alcohol and tools to keep them safe and informed.

Root will retire from his role as executive director on September 30, with Najduk taking the role from October 1. The coalition is in the process of filling Najduk’s program director position.

An Air Force veteran who spent nearly 40 years working for his family’s printing company, Root hadn’t expected his career to lead him into prevention work, but he’s grateful for the unexpected trip. His wife, Kim Root, recently retired from her position as Director of Communications for Huron Valley Schools. It was her job that brought the couple from St. Johns, Michigan to Highland in 2014.

As Root worked to build a board of directors to qualify for the DFC grant, he doubted he could succeed in his new community. He remembers talking to Christian Wuerth, Milford village manager, who is also a board member.

“He said, ‘Randy, don’t worry – people in this community won’t let you down. You’ll have everything assembled in no time. And in two weeks I had 12 board members, many of whom are still on the board and have become good friends of mine.

A friend is HVS school board member Denise Pistana, who sits on the coalition board and helped Root get started.

“Randy is the face of the Huron Valley Community Coalition,” Pistana said. “When he approached me in 2015 and laid out his vision for resuscitating the organization, his enthusiasm for what it could be was infectious. Randy has the ability to connect with people and create excitement for the project.

Root’s enthusiasm hasn’t waned, and in fact he’s not stepping away from the coalition entirely – for next year he will remain available for manager training and special projects – to help form the new program manager and provide assistance as needed. ; something he can do remotely as he and Kim move to the Grand Haven area.

“I suspect I’ll be in contact with people across the state as well,” Root said. “Because I really enjoy the work and watching the process take effect.”

The HVCC’s work caught the attention of Stephanie Strutner, a trainer for the National Coalition Academy (CADCA), who encouraged the HVCC to apply for a Blue Ribbon designation, awarded to the nation’s top coalitions. They will know this fall if they have received it.

Through it all, working with the community to help children grow up healthy and strong has been most important to Root.

“It’s been a source of joy for me,” Root said. “I’m really proud that we’ve been able to build a strong foundation together…and some truly outstanding results, in terms of reducing substance use among youth in our community.

Cancel student debt and bail out ordinary people for a change