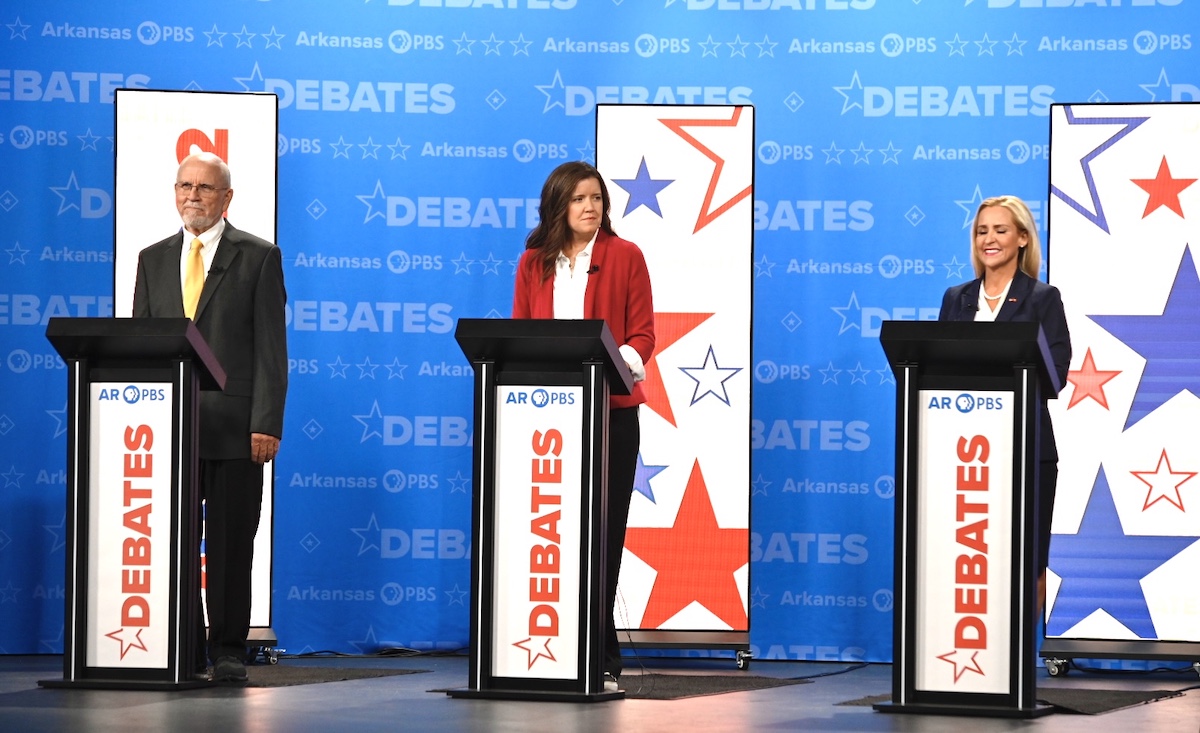 The Arkansas PBS debate for lieutenant governor was about what I expected:

Democrat Kelly Krout was friendly and informed. Notably, she said she wanted to be held accountable for the criminals who rioted at the US Capitol on January 6. Rutledge declined to echo that sentiment, preferring to speak about the Black Lives Matter protests in Little Rock.

Libertarian Frank Gilbert defended his membership of the Oath Keepers, whose leader is on trial for sedition, but he added a brilliant note by saying that the office of lieutenant governor had few functions and, in a perfect world, should be abolished. He said his job would be to check the news every morning “to see if the governor had been charged or if he was dead or else I would probably turn around and go back to sleep.”

Moderator Steve Barnes asked Rutledge about the ethical complaint filed against her and other Republican attorneys general for using a lawsuit to try to overturn the presidential election. She dismissed it as a political, “utterly frivolous” attack. She said she accepted that Joe Biden was elected president. Krout seemed to find Rutledge’s invocation of “frivolous attacks” ironic since she had mounted so many frivolous complaints against the Obama and Biden administrations. His use of taxpayers’ money for this was “not helping the state,” Krout said. Gilbert defended Rutledge, describing the ethics complaint as a personal attack. Rutledge missed his point, saying he and Krout were splitting up,

Krout viewed the position as a part-time job that she could use to advocate for issues such as foster care. Rutledge said she was ready to be governor. She didn’t call the part-time job, even saying, in response to a question about whether she would add a security force (like she has in the attorney general’s office), that the office needed to be staffed enough to respond to public inquiries. questions. Pressed for an answer on the security issue at a press conference after the debate, she said the state police provide that answer upon request. She seemed to indicate that it might be necessary. She said she had received threats, that there were people in the prison system who knew who she was, and that she had a small child.

Constitutional amendments: Krut said Number 2, requiring a 60% vote to pass a constitutional amendment or returned law was an “insult” to voters because it made it harder for them to pass measures. Rutledge dodged the question during the debate, although she commented that changing the Constitution should be difficult and should not be done “willy-nilly” with the help of “outside” money. ‘State “. She said the Constitution had been amended 100 times. In fact, it has been modified 90 times in 148 years. Eventually pressed at the post-debate press conference, she did not say how she would vote on No. 2.

Rutledge repeatedly invoked the phrase “woke liberal left agenda” and denounced the division. But she defended Trump’s nastiness. He’s a “fighter,” she says. She repeatedly spoke about Joe Biden and bragged about her challenges to his actions, repeatedly mentioning student loan forgiveness, which Krout endorsed.

Many times you must have wondered if Rutledge was a liar or just plain stupid. Case in point: When asked how Biden caused inflation, she cited the cancellation of the Keystone pipeline as driving up gas prices around the world.

Krout smiles at being labeled a woke liberal. She said politicians today (think Rutledge – repeatedly) use words like money from out of state that are “meant to freak people out”. She commented, in relation to number 3, nominally a religious freedom amendment: “We have religious freedom. We live in the United States.

Asked about renewable energy, Krout welcomed the development of more wind and solar power and said it could be particularly useful in agriculture, reducing costs. Rutledge dodged the question and turned it around, saying the “woke liberal left” was trying to tell farmers how to farm. Her husband is a farmer and conservationist, he said. Of course, that’s not what Krout meant. She cited her work fighting the EPA, which is essentially a job protecting the fossil fuel industry.

January 6 came when Gilbert defended his membership in the Oath Keepers, saying he had signed up as a constable as a signal that he would never agree to unconstitutional action. He denounced the violence on Capitol Hill like the other candidates. But Krout said every election denier and every person siding with Donald Trump contributed to what happened on Jan. 6. Rutledge said the country is expected to “surpass” that day. However, she was NOT ready to walk past the BLM steps. She claimed the state capitol was “stormed,” buildings were defaced and people were injured. She also cited the supposed “defunding of the police movement”, essentially non-existent in Arkansas. His support for law enforcement did not include mention of supporting Capitol cops who were brutalized on Jan. 6. She added, in passing, that she was “nowhere near Washington DC that day.”

Shutting down Rutledge could have been one of his TV commercials, a simple recitation of buzzwords: excessive federal government, 2nd amendment, pro-life.

Krout said she was a mother of seven, a former adoptive mother, a hard worker and willing to listen and work with both sides. She said too much political rhetoric is scary and manipulative. Fear is a powerful motivator, she says. “But help is a more powerful motivator.” On several occasions, she said the debate was fun. His frequent smile was a refreshing counterpoint to Rutledge. She began by pointing out how becoming a mother had made her a better public servant. I was wondering if Krout should get a multiplier of seven on that score.

PBS will rebroadcast the debate at 7 p.m.

You can also watch the full debate and post-debate questions on YouTube.

Some retirees agree to return to work

Get to know the CEO: Justin McDonald explains why Saleo is changing the way sales demos are done