Year-to-date, the Dow Jones Industrial Average has lost about 15% of its value, but Georgia’s economy has continued to rebound, according to a report released Thursday by the state Department of Labor.

Georgia added 19,000 jobs last month, more than three times the pre-pandemic average for April growth. That kept the jobless rate at an all-time low of 3.1%, unchanged from March and still below the national rate, said Mark Butler, the state’s labor commissioner.

This unemployment rate remained stable even though the labor force increased by 16,337 during the month. The number of Georgians out of work and looking for work is now at its lowest level since June 2001, reflecting the pace of hiring.

The state’s job board has listings of more than 315,000 vacancies, Butler said.

But filling a job isn’t as easy as posting it, said Julie Anderson, vice president of the Marietta-based Wrench Group, which owns several service companies in the area, including Coolray Heating and Air and Mr. Plumber. .

“We hired 150 people this year in the Atlanta metro area,” she said. “But it’s incredibly difficult to find these people because most of them are already working.”

The Georgia data belies the gloom on Wall Street, where stocks sank on a wave of fears over high gas prices, rising interest rates and inflation. Adding to that gloom was a report on Thursday that nationwide jobless claims soared nearly 11%.

By contrast, Georgia’s initial claims last week fell to less than 4,000, which is below typical pre-pandemic levels. 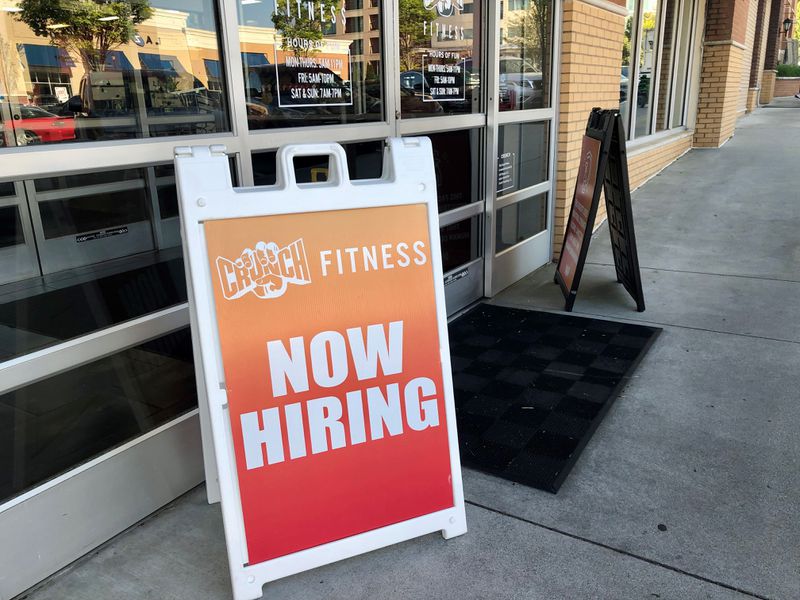 Thursday’s report from the state’s DOL confirms what lenders are seeing, Katie Saez, regional president of Truist Bank, told the Atlanta Journal-Constitution. Businesses may be facing higher costs, but they are seeing strong demand and want to meet it.

“There’s still a lot of strategic investment to grow the businesses, to venture into new territories,” she said. “What I hear about is the labor shortage, the high level of competition for talent.”

That competition is particularly acute in home services, where the pandemic has fueled a surge in demand, said Dave Rychley, president of 360 Painting, a metropolitan service for homes and small businesses with 75 employees.

Much of his hiring is by word of mouth, with offers for higher pay or more flexibility because he usually has to steer someone away from another job, he said.

“There just aren’t a lot of unemployed painters, not good ones,” Rychley said.

Other in-person services that have suffered during the pandemic are now scrambling for workers as consumers return.

“It’s been a pretty tough couple of years for the company,” said Duane LeVine, principal of Level 5 Capital Partners, which invests in wellness and fitness companies, and is the majority investor in Big Blue Swim. School at Johns Creek.

The school has fewer than 20 employees, and if the right candidates come forward, LeVine said, he would hire up to seven more.

Big Blue has created many part-time jobs, in an effort to give workers the flexibility they need to stay with the company longer, he said.

“When you’re talking about swimming lessons for your child, what you want is consistency,” he said. “It’s not a passive job, you have to be passionate. These are children’s lives and it is an essential skill that you are teaching.

But salary is always at the heart of hiring.

To attract and retain workers, wages in many fields rose last month at an annual rate of 6%, according to the Federal Reserve Bank of Atlanta. And for workers who change jobs, the wage increase has averaged 7.2%.

While these are historically significant bumps in wage growth, inflation is also taking a hit, so growth in real terms is not as robust.

“The jobs that stay open are usually the least attractive or the ones that don’t pay as much,” said Jill Eubank, vice president of Randstad, a global recruiting firm.

A successful business must accommodate workers’ willingness to change jobs, she said.

“We used to ask employers, ‘What do you usually pay?’ “, she said. “But now they’re constantly asking us, ‘What should Am I paying to find the employees I’m looking for? »

The strongest wage growth has been seen in transportation and warehousing, where many jobs are paying 25% more than before the pandemic, she said.

And that sector — which includes grocery stores, home improvement stores and retail stores, as well as warehousing and logistics — has been a big part of hiring during the economic recovery of the past two years, a said state labor commissioner Butler.

This sector now represents more than one million jobs in Georgia, a sign that consumers who make up more than two-thirds of the economy are still in good financial health, he said.

Jobs in Georgia, before the pandemic:

Sectors with the most hires in April:

Loyalty study shows young professionals are on the move: Six in 10 have changed jobs during the pandemic or expect to work at another company within two years