You don’t need a bank loan to get into tactical, long-range .22 LR competition. What you need in the beginning, in order to avoid discouragement from too many missed targets, is a decent entry-level rifle and scope. If budget and interests warrant, upgrading can follow later.

The competition combines timed shots, movements, sometimes awkward positions and targets varying from 25 to 300 meters and more, often in the same series of shots. The game not only requires an accurate rifle, but a scope with a wide latitude of capabilities. You can read inspirational articles and then commit a few thousand dollars on a rifle and scope, but the prudent approach for the frugal is to start with cheaper gear that’s still adequate enough to be at least reasonably competitive.

An entry-level rig at an informal game appears to be a cheap Savage Mark II topped off with a Leupold 3-9X scope.

The payoff is that time spent in the field with less expensive gear will provide you with the experience needed to see if the game really interests you and to guide gear upgrade decisions later. I was lucky enough to start the game informally with a local group of shooters. Their gear runs the gamut from standard Ruger 10/22 to Vudoo and Vortex combos for serious NRL 22 competition that tops the $4,000 mark. The benefit of listening and observing allowed me to make sensible decisions about choosing my own entry-level gear.

For $350 I bought a Ruger American Rimfire rifle that was already equipped with Weaver scope mounting bases and a bipod. The stock is a rugged laminate and sports an aluminum bedding block, which provides added confidence that the rifle is capable of excellent accuracy. The trigger is a consistent 2.25 pound weight, ultra light for a shooter used to the 4.5 pound triggers that are required in High Power Rifle competition.

I topped the Ruger with a Mueller All Purpose Tactical 4.5-14X 46mm scope, bought for $50 from a friend who had used it on his own entry-level rig. The Mueller is a decent scope but, oddly enough, the reticle has mil dots, while adjustment is in ¼-MOA clicks, two completely different measurement systems. I asked the manufacturer if there was an advantage in the mixed system; the answer was “No”, without further details.

At the time (prior to shooting my first tactical/long range .22 LR) the Mueller seemed to have the specs the game required, but the 14X magnification wasn’t enough for me, and the elevation adjustment in the scope hitting the upper stop at 200 yards. Most scopes typically lack elevation adjustment at what is quite “long range” for .22 LR, just a few hundred yards. The solution, of course, is to lift the rear mount with shims or purchase a one-piece mount or rail with this feature already machined, usually referred to as a MOA rail. With cushioning material already available, there was no cost to doing it myself. A 20 MOA setting allowed the Mueller to reach 300 yards without running out of elevation adjustment. 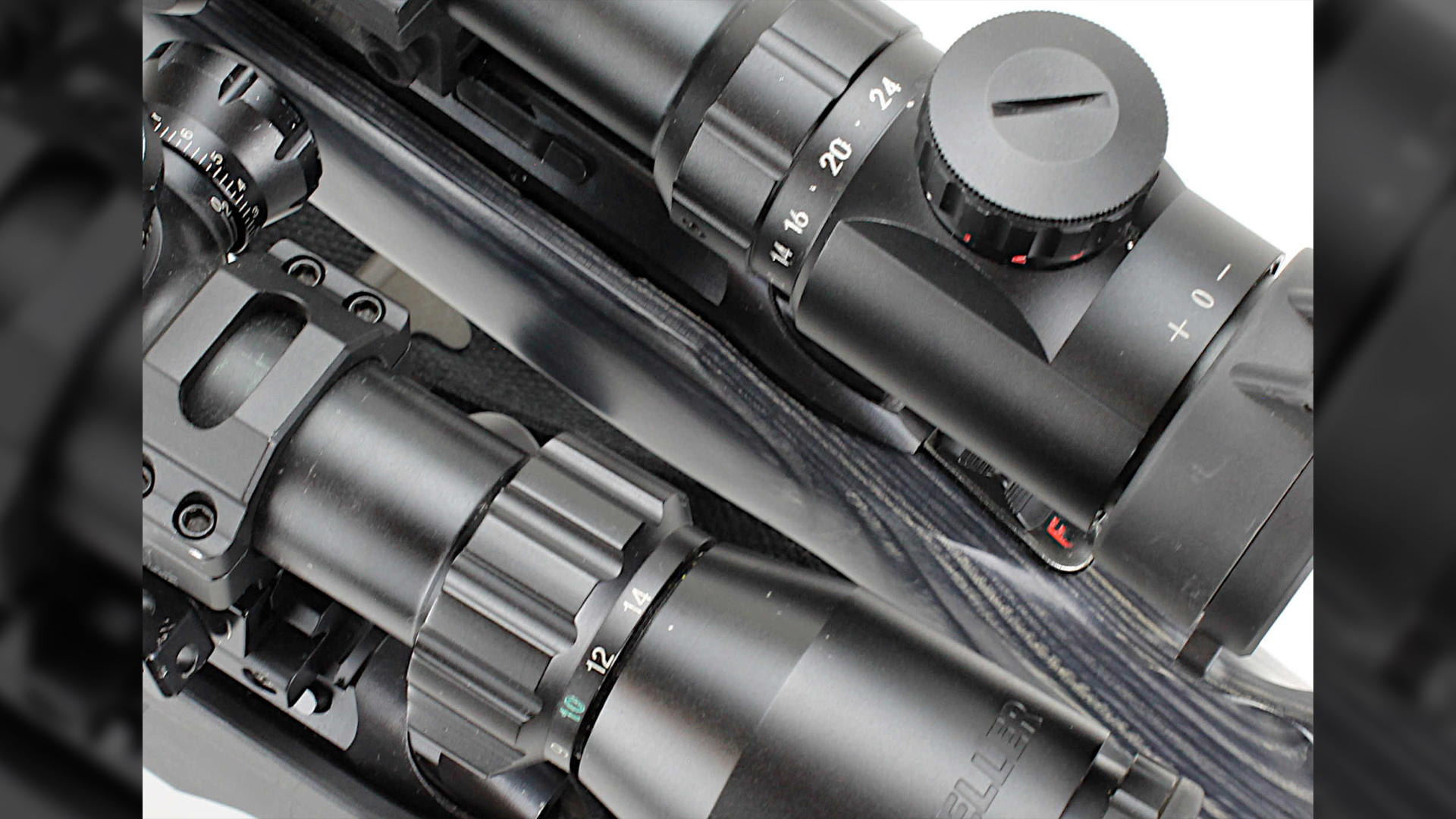 Since the shooting distance can vary from 25 to 300 meters and more, the scopes should have a wide magnification latitude, such as 6X-24X or 5X-25X. 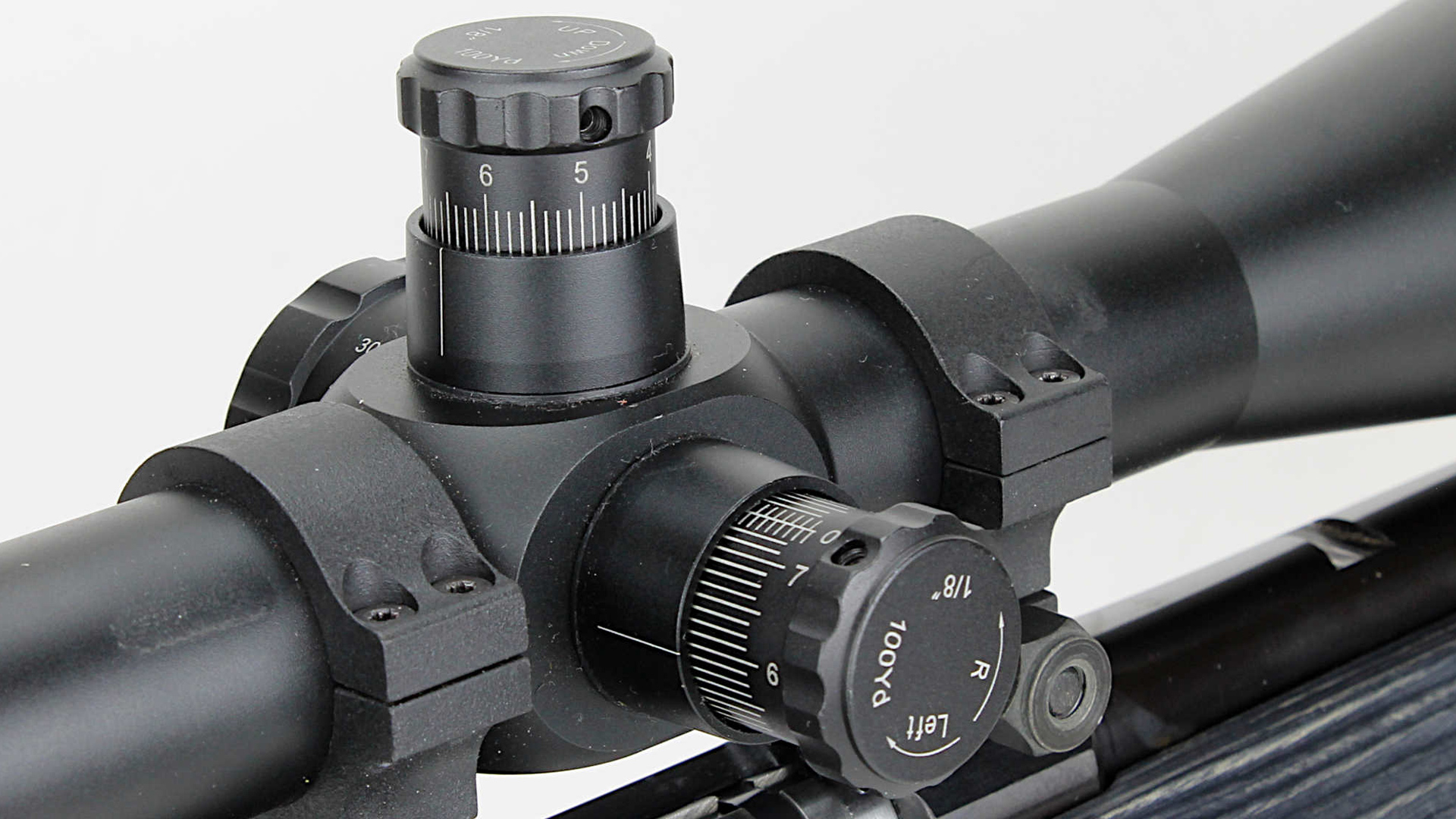 Reach adjustments should be easy to reach and see without breaking a cheek weld. The rings must not obstruct the view of the turret markings.

I moved the bipod to the Ruger Precision Rimfire and mounted the rifle with a new Osprey Global TA 6-24X 50mm IRF scope purchased at a gun show for $240. The 50mm lens required the addition of risers to the Picatinny rail. The scope reticle includes windage and elevation hash marks in five MOA increments; adjustments are 1/8 inch clicks. The lower part of the reticle is for rangefinding of human targets, not useful for that purpose in .22 LR tactical/long range play, but usable for lay shots once you set the ballistics beforehand. I then swapped the scopes on both rifles, this is how they now appear in the photos. 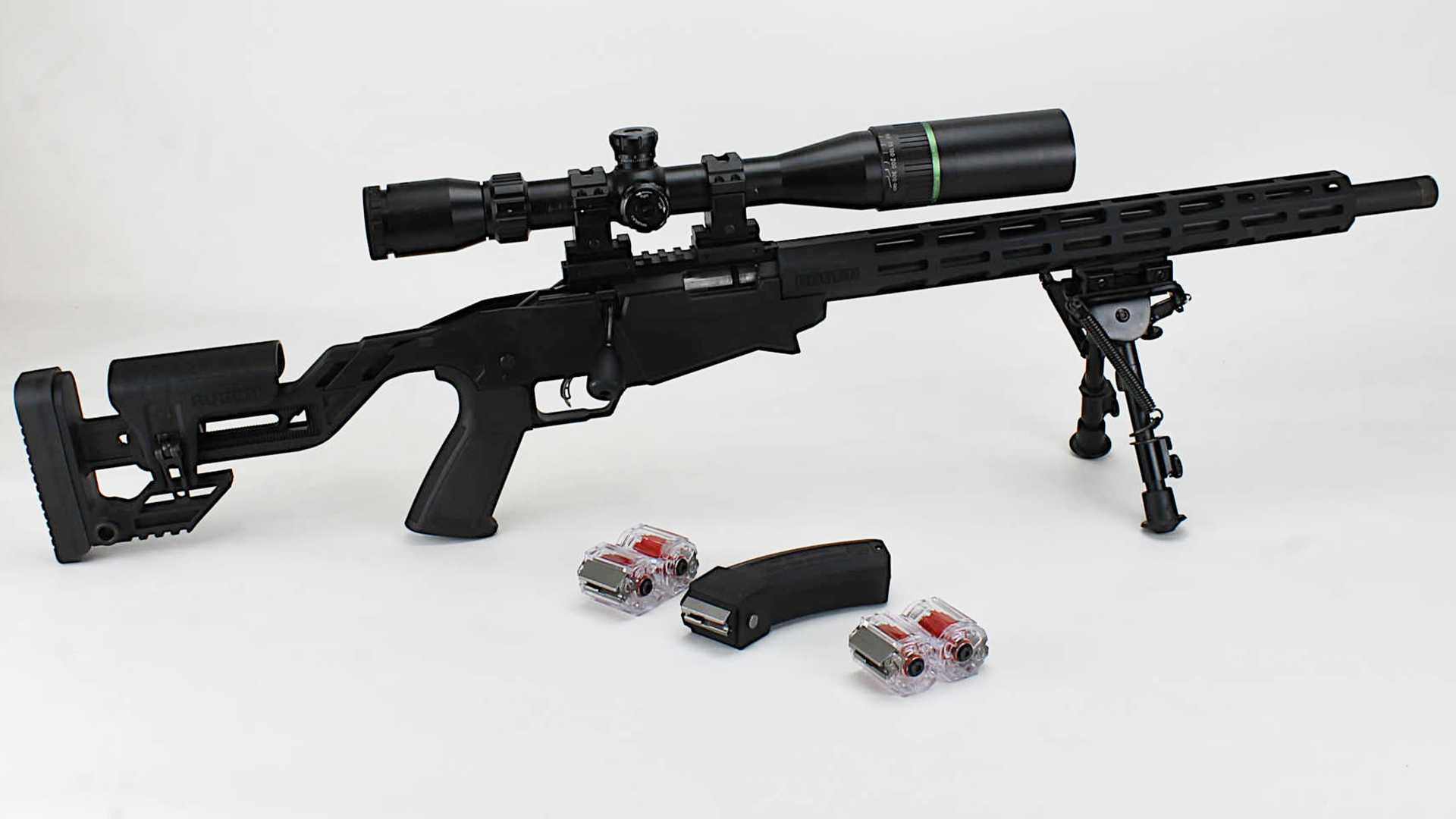 Ruger’s Precision Rimfire rifle has features of equivalent quality, but a standard chamber and the 14X magnification of the mounted Mueller scope are not enough for shots over 300 yards.

A now smooth bolt action and lighter trigger are the positives of the Ruger Precision Rimfire, along with better ergonomics provided by the pistol grip and adjustable stock. The barrel is easily removed and replaced with a genuine match-grade barrel, using a common AR-15 gunsmith’s wrench. 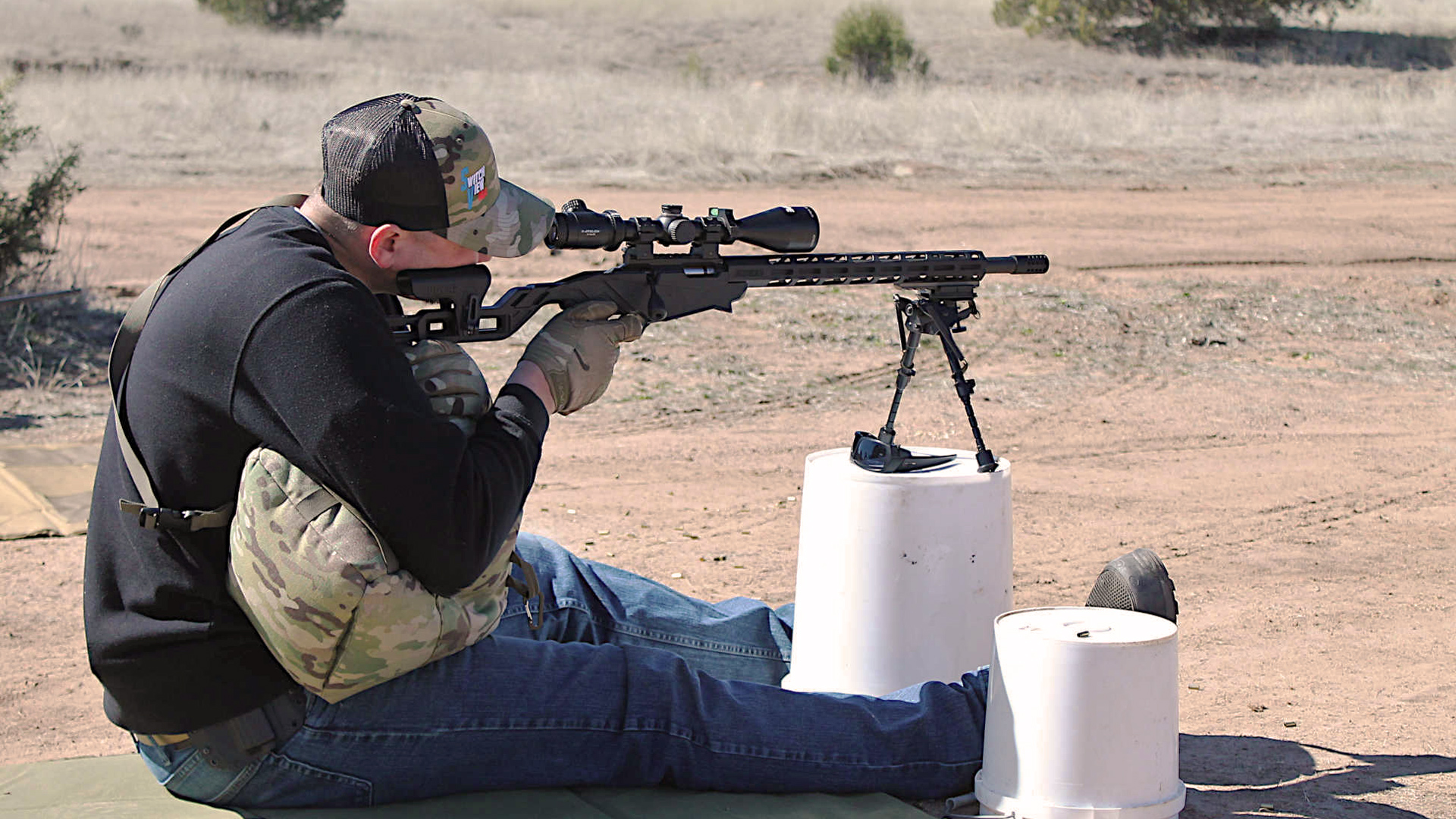 You will want to have plenty of magazines loaded and ready to go. The lowest minimum for competition is four 10-round magazines, which you can reload between stages, although three or four times more realistically. Higher capacity mags may be allowed, but five-shot mags are a distinct disadvantage in the time wasted switching mags during a stage. 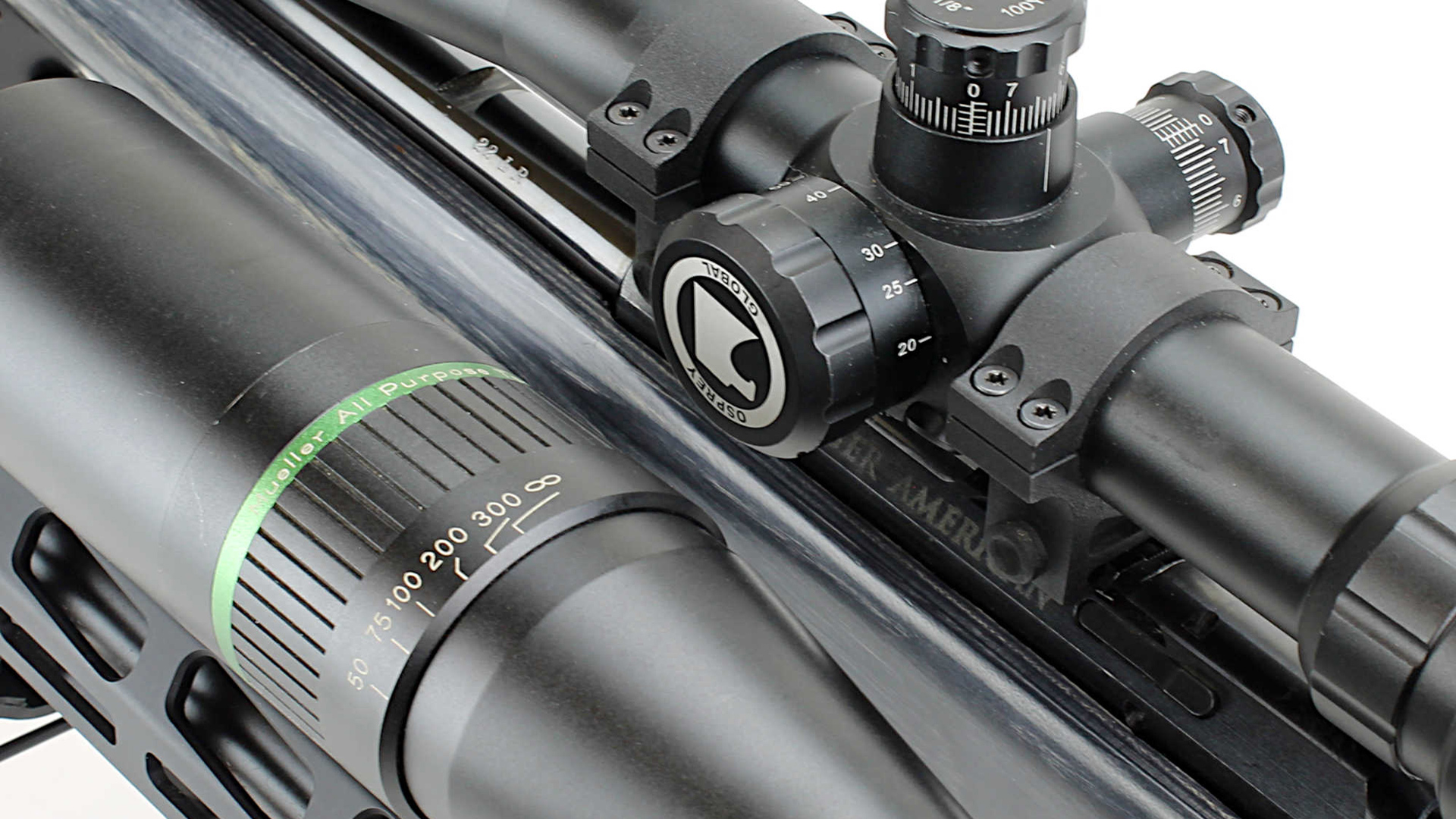 A range map – a printed chart of range elevation settings for various distances – is an absolute must. Once you’ve chosen specific .22 LR ammunition for your rifle, use a ballistics app or online ballistics calculator to create your range map. Competitors also use a ballistics app on their phones behind the firing line to calculate real-time adjustments to current weather conditions.

Slanted bipods are necessary, as many shooting scenes are designed specifically for them. Most shooters avoid slings – where I’ve found one useful for certain positions – but maybe that’s just a long-time high-powered rifle shooter talking. 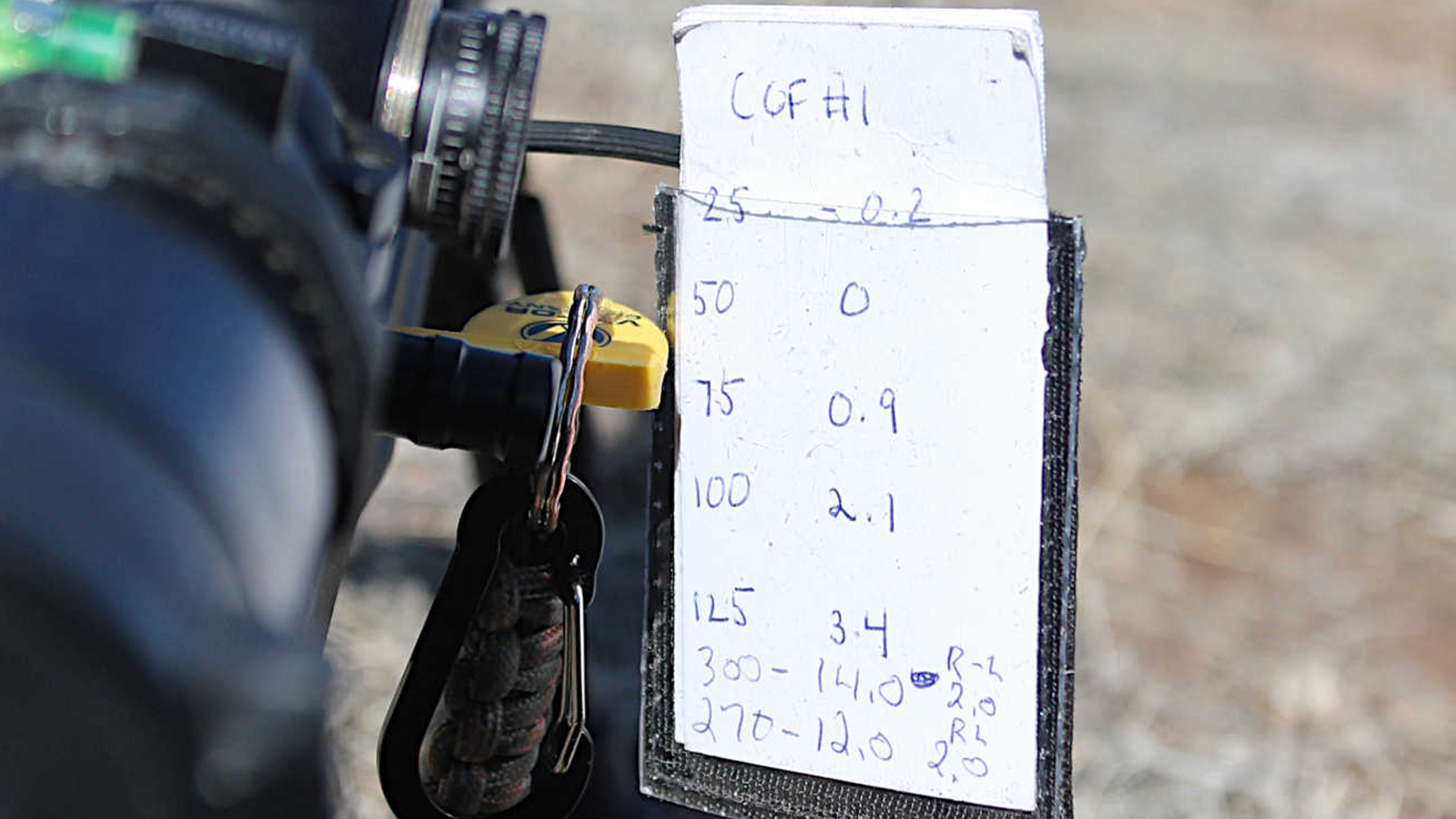 An instantly accessible range map is essential and can be prepared using a ballistics application.

With some experience behind me, and looking at what others are shooting, perhaps a better entry level choice might be the Ruger 10/22. The semi-automatic action has some advantage in timed stages, and one can easily upgrade later (or even immediately) with a higher quality barrel and trigger group. Additionally, there are endless choices of parts and accessories, few of which require the assistance of a gunsmith.

There’s plenty of money for entertainment in .22 LR tactical/long range play, and you don’t need to spend too much to get started. But be warned, you’ll likely have so much challenging fun that you’ll end up spending on upgrades.

City of Redding to include teens in decision-making

Apodaca: Teachers begin to question the benefits of their profession