Shoppers flocked to the Crystal Mall in Waterford in search of bargains and a bit of Christmas cheer on Black Friday, the day after Thanksgiving on Friday November 27, 2009. 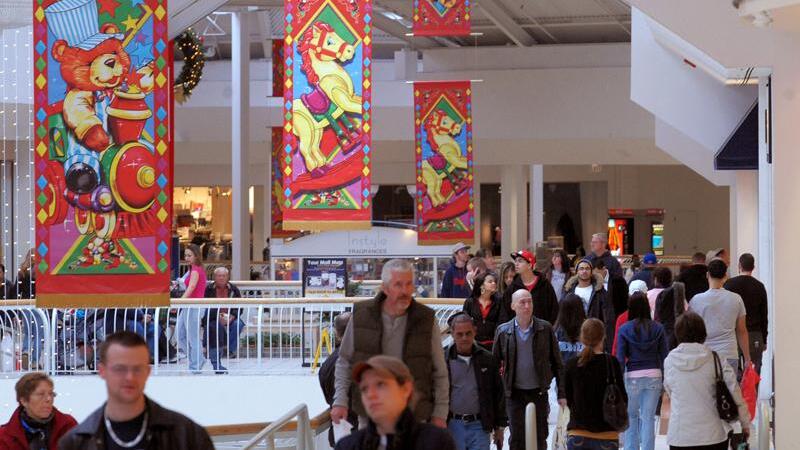 The Waterford Crystal chandelier on November 25, 2011 at the Crystal Mall in Waterford. The chandelier survived an interior renovation in 1997, when the owners had to bow to public pressure and abandon plans to eliminate it from the new design. (Sean D. Elliot/The Day) Buy reprints 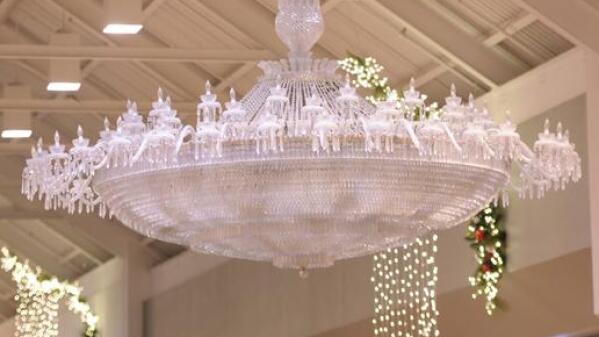 What will happen to the giant crystal chandelier?

For the strongest shopping quarter of the year, the Crystal Mall has donned Christmas lights, and its retail holdover is giving it its best try of the magic season. A few smiling employees frame well-lit shops that stay open if you need a diamond or a new pair of glasses. Or maybe someone on your list can use a bunch of store accessories from Bed, Bath and Beyond.

Above it all, the Waterford Crystal Chandelier awaits its fate.

It’s been crystal clear (not sorry) for years that the mall’s days are numbered, but what will happen to the next property is still unknown. For now, the contrast to the crowded hallways of the 80s through 2000s is so melodramatic it could make for a Hallmark movie. The heroine returns home for the holidays from her marketing job in a big city, only to find that the mall where she used to tell Santa what she wanted for Christmas and later worked his first real job now needs her to save him.

Well, she should give up and go back to Gotham. The owner of most of the Waterford Mall’s square footage since 2012, Simon Property Group, has halted payment on a $95million loan and transferred title to the lender. All but one of the anchor stores have long since closed.

When the Crystal Mall finally shuts down, it will be a final step for a business entity that personifies the region’s shift in focus from local retail to national brand stores. Its advent enticed shoppers by bringing department store fashion, but the mall also accelerated the inevitable for downtown New London, Groton, Norwich and smaller Main Street neighborhoods. A few local businesses have moved to the mall; others remained downtown until their expiration. Now the circle can close with a share of the market going to locals as an alternative to dominating impersonal online shopping.

The start was exciting, however. The mall’s developers showcased their shiny new property in 1984 with a dressed-up party for local dignitaries and seemingly everyone in Waterford. It was an opulent affair, for a party held on tiled floors between shop windows. One unforgettable sight was a well-known primary school principal walking away from the bar with crab legs sticking out of his jacket pockets. There was a contest to guess how many crystals there were in the chandelier.

In its heyday, the mall’s management saw fit to be a benefactor to the wider community beyond Waterford’s tax base alone. There were various fundraisers and the Simon Society sponsored scholarships open to local children. Mall doors would open before stores so early morning walkers could use the walkways, sheltered from the weather. The biggest win-win came from entry-level positions that gave local high school students their first job, teaching valuable lessons in relating to the public.

That was then, before the decline of indoor-style malls, the rise of internet shopping, and that killer of so many last chances, COVID-19. The near-emptiness of a huge structure and its acres of parking space is now. The next step won’t come easily, as different investors own different parts of the property with potentially one common interest: profit.

Developers are conditioned to expect a long game; their proposals regularly must win the approval of many levels of government representing the competing interests of taxpayers, the environment, and quality-of-life residents in the neighborhood.

In February 2021, an op-ed in Day raised the question of what a closed mall might look like. Day’s staff writer Brian Hallenbeck kept readers informed of financial developments that could affect options. Around this time, Waterford began creating an advisory body that would presumably prepare the city to sit at the table. The initial committee consisted of several city officials; members of the local legislative delegation; the Eastern Connecticut Chamber of Commerce; the Southeast Connecticut Enterprise Region; the Southeastern Connecticut Council of Governments; AdvanceCT and the State Department of Economic and Community Development. The city’s website does not list any such body’s ongoing activities, and a call to the first councilor’s office was not returned.

The pace of defining the mall’s future seems to have to wait, wait, hurry. It is important to be ready when the gears change. Waterford has a primary interest, as a host city, but the region and the state have an economic interest in what happens at the site. A conversation about regional economic development is in order.

Perhaps Waterford could have the first words on the chandelier.

Lisa McGinley is a member of the editorial board of The Day.

The “energy gap” no one wants to struggle with