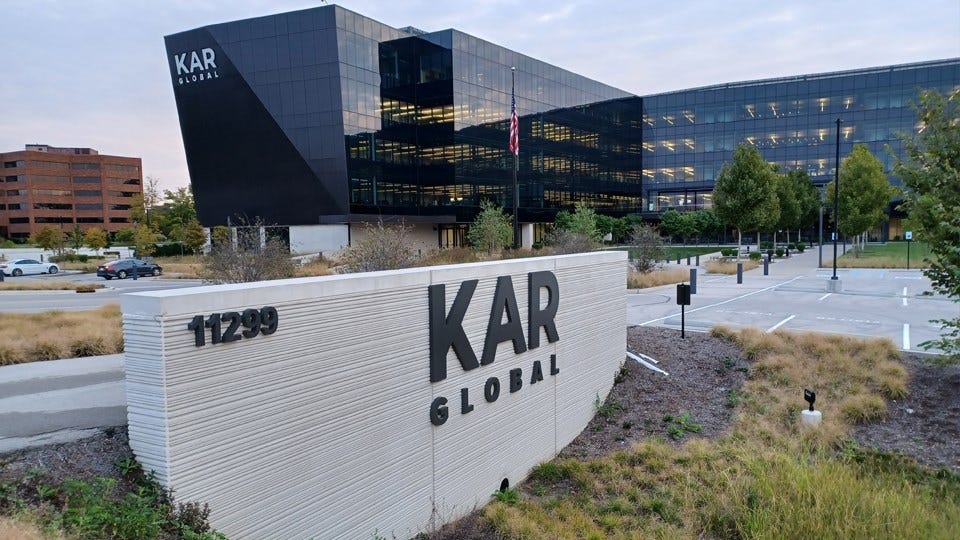 Carmel-based KAR Auction Services Inc. said Wednesday it plans to cut more than 300 positions in the United States and Canada as the company moves some of its jobs overseas.

During a quarterly earnings call with analysts, KAR chief financial officer Eric Loughmiller said the company has entered into agreements with two offshore companies to handle the back office functions that KAR currently handles in-house.

Loughmiller said affected employees have been notified, but he did not say whether those employees work at Carmel’s corporate headquarters or elsewhere.

“This will impact over 300 positions in the United States and Canada,” Loughmiller said on the call. “We plan to begin migrating these roles over the next three quarters.”

KAR separately told IBJ that the company already has positions overseas in IT, customer service, finance and logistics. He also said the more than 300 jobs include some currently vacant positions.

Offshoring is expected to result in cost savings of more than $10 million per year, Loughmiller said.

As of December 31, KAR had 9,600 employees, of which approximately 7,100 worked in the United States. The remaining 2,500 were in Canada, Europe, Mexico, Uruguay and the Philippines. Approximately 700 KAR employees work in Indiana.

During Wednesday’s call, Loughmiller described the shared services relocation as part of the company’s broader transition to an “asset-light” operation, selling wholesale used vehicles online rather than at physical auto auctions.

“The fact that our marketplaces are digital and generally not tied to a specific location allows us to move a number of support functions offshore without impacting the customer experience,” Loughmiller said.

In May, KAR sold its U.S. physical auto auction business to Tempe, Arizona-based Carvana for $2.2 billion.

As part of its digital transformation, the company has been working on a previously announced plan to cut costs, though it hasn’t publicly detailed the full extent of what those reductions entail. During Wednesday’s call, CEO Peter Kelly said the company is on track to cut selling, general and administrative expenses by $30 million this year.

“Achieving our 2022 cost reduction target was just the start. Disciplined cost management and a focused investment strategy will remain a priority for this business going forward,” said Kelly.

The company said on the call that it had completed the sale of a 57-acre parcel in Montreal, Canada, as part of its transition to becoming a small-cap company. The divestiture will result in a gain of approximately $35 million for the company.

Also on Wednesday, the company announced that Loughmiller plans to retire in January. Once a successor is named, KAR said, he expects Loughmiller to play an advisory role for some time to ensure a smooth transition.

Regarding KAR’s financial performance in the third quarter:

Kelly said he was pleased with the company’s performance in the third quarter, “especially given what continues to be a very challenging industry and economic environment.”

KAR released its financial report after the close of trading on Tuesday. Shares of the company were trading at $13.61 early Wednesday afternoon, down 8.25%, or $1.20, from Tuesday’s closing price.

When we remove the notion of retirement – ​​Twin Cities

How to find a job without experience or qualifications